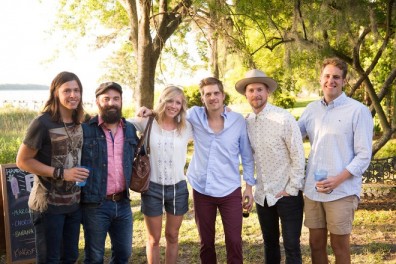 “The fact we raised so much more money this year demonstrates how much people believe in the work PMI is doing around the world,” said Britt Gilbert of Commonwealth Cares Foundation and a PMI board member. “Not only did people come out to enjoy a game of golf and an after-party concert, but they were able to learn more about the concept of sustainable health care and the model that has made PMI so successful.”
The money will fund about half the cost of a second clinic in Uganda with work slated to begin in January 2015. PMI’s first clinic was in Masindi, Uganda. In January 2014, PMI dedicated its first clinic in El Viejo, Nicaragua. The second Uganda clinic will serve as a satellite for the main Masindi-Kitara Medical Center, where more than 800,000 patients have received care. Also this year, PMI announced plans to expand its efforts into Burundi.
Joining NEEDTOBREATHE on the golf course were musicians Drew & Ellie Holcomb, Steven Curtis Chapman and Ed Roland of Collective Soul. Professional golfers Kevin Streelman along with hometown golfer Russell Henley participated along with Matt Diaz of the Miami Marlins; Todd Ellis, voice of the Gamecocks; and musicians Ben Rector, Mark Bryan and John Mark McMillan.

NEEDTOBREATHE recently released the music video to their single “Multiplied,” which continues to make gains at radio, breaking into the Top 20 on the Billboard Christian Songs Chart. “Multiplied” is off the band’s fifth studio album, Rivers In the Wasteland, which debuted at No. 3 on the Billboard 200 in April.

About NEEDTOBREATHE:
NEEDTOBREATHE is an American Rock ‘n’ Roll Band from South Carolina, effortlessly woven from the musical traditions and faith of their upbringing in the Deep South of the United States. Made up of brothers Bear Rinehart (vocals, guitar) and Bo Rinehart (guitar, vocals), as well as Seth Bolt (bass, vocals), the band hit their big break in 2005 when they signed to Atlantic/Lava/Word Records. The career to follow would include five full studio albums, chart-topping cross-genre success, multiple headlining tours and media coverage on CONAN, The Tonight Show with Jay Leno, The Ellen Degeneres Show, Late Night with Jimmy Fallon, The Late Show with David Letterman, MTV, FOX and much more. The band’s fifth studio album, Rivers In The Wasteland, is available now.