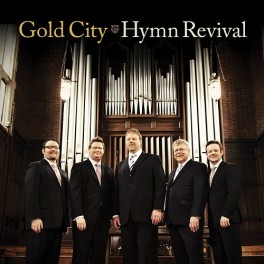 Prior to the release of the new project, founder and bass singer Tim Riley suffered a mild stroke while touring. After a brief stay in the hospital, Riley was released early from rehab in Gadsden, AL.

“During Tim’s recovery, we listened to the album and ‘Part the Waters/I Need Thee Every Hour’ stood out as the most poignant song,” states label president Ken Harding. He continues, “It features Tim on the ‘Part the Waters’ section of the song; because of his journey of recovery, it became clear to us that this should be the first single.”

“Recording Hymn Revival prepared us for this situation. The hymns that we recorded have been an inspiration to me all of my life. This song in particular has been a huge encouragement to our family during this time,” states Danny Riley, Tim’s son and the group’s lead singer.

“This song combines timeless lyrics and the voices of a legendary group. It delivers an old message in a fresh and inspiring way,” states radio promoter Jan Puryear. She continues, “Tim Riley, longtime bass singer, gives a moving performance in ‘Part the Waters,’ a song that has special meaning for him. ‘Part the Waters/I Need Thee Every Hour’ is another hit song in a long line of great singles from Gold City.”

Tim Riley comments, “’I Need Thee Every Hour’ is prayer that should be a part of our everyday lives. I have always loved that great old hymn. I had never heard ‘Part the Waters’ before we recorded it, so I wasn’t sure how this would work. But when I sang it in the studio I knew immediately how this was going to bless people, because it really touched me. When I had the mild stroke, this song started flooding my mind and has really ministered to me.”

About Gold City Quartet:
Gold City is one of America’s premiere gospel vocal groups. Haling from Gadsden, AL, the legendary group has won more than 60 Singing News Fan Awards, recorded over 40 projects, has been touring for more than 33 years, and won multiple Dove Awards. For additional information, go to www.goldcityqt.com.

About New Haven Records:
New Haven Records is a Nashville-based music corporation that includes label, publishing, and film companies. For almost three decades, they have focused on the uniquely American genres of Black Gospel, Southern Gospel, and Country & Bluegrass Gospel. New Haven’s product is distributed to the mainstream through SONY Distribution and to the Christian marketplace through Provident Music Distribution. For additional information, go to www.newhavenrecords.com