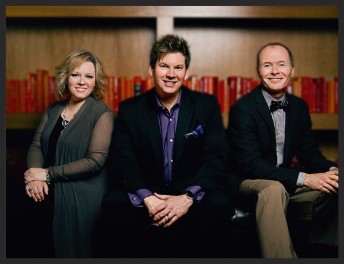 Brady has spent the last 12 years as the baritone singer of the award-winning Booth Brothers trio, but he will now be singing with his wife Melissa and former Legacy Five pianist Tim Parton as the Jim Brady Trio debuts on Thursday morning, Jan. 1.

Paul Lancaster is joining the Booth Brothers, and he will make his debut with the group on Wednesday evening, Dec. 31. That will also be Brady’s last concert with the group.

“It’s extraordinarily rare that you get to witness this much Southern Gospel Music history in one place at one time, ”says Legacy Five group manager and lead singer Scott Fowler. “To see and hear the Booth Brothers for the last time with Jim Brady, and to hear the new Jim Brady Trio and to hear the new Booth Brothers lineup all at the same event is really exciting. What better way than to ring out the old year and sing in the new year … the end of a season and the start of a new one.”

There will be four sessions of this year’s New Year’s Eve Celebration event, beginning at 7 p.m. on Dec. 30 with a lineup that includes the Collingsworth Family, the Burchfield Brothers, Triumphant Quartet and Tim Lovelace. The Collingsworth Family will be back for a 10 a.m. session on Wednesday morning, Dec. 31, along with the Freedom Singers and Rick White.

In addition to performances by both the new and existing configuration of the Booth Brothers, the 8 p.m. session on Dec. 31 will also include Greater Vision and a Jubilee performance that includes the Booth Brothers, Greater Vision and Legacy Five. Legacy Five will be performing at each session. Then, the event will conclude with a 10 a.m. concert on Jan. 1 that will include Cal Reichnor in addition to the host group and the Jim Brady Trio.

Tickets are available by calling 931-379-7262, and registration for full weekend packages – which include lodging at the Gaylord Opryland Hotel – can be done by visiting www.celebrationnye.com.

For more information on Daywind Records, visit daywindrecords.com or contact Amanda Martin at 1-800-635-9581.