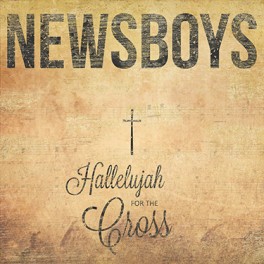 Hallelujah For The Cross includes the title-cut and debut single, which is currently impacting Christian radio around the country. The album also showcases a new arrangement of Newsboys’ “Where You Belong” with “Turn Your Eyes On Jesus,” as well as favorite hymns “Jesus Paid It All”; “Holy, Holy, Holy”; “It Is Well”; and “All Creatures Of Our God And King,” among others.

“Hymns are important to me,” says Newsboys frontman Michael Tait. “We picked through songs that went way, way, way back into my past and my dad’s Baptist church. I love modern worship but I just love that old stuff because they were written in such desperate and perilous times, and out of great pain comes great resolve, I think. When I sing them, they go deeper in ways to me than a lot of things I reach out for when I’m in that spiritual drought.”

UNITED in the Favorite Artist – Contemporary Inspirational category this year. The 2014 American Music Awards will air live on ABC at 8 pm ET on November 23 from the Nokia Theatre in Los Angeles.

Newsboys are currently headlining the 35-city fall “We Believe Tour,” with special guests Family Force 5 and 7eventh Time Down. The tour, which has seen sellouts everywhere it has visited, hits Dallas; Tulsa, Oklahoma; Duluth, Minnesota; Rockford, Illinois; and Houston, among other cities, before concluding November 16 in Youngstown, Ohio.