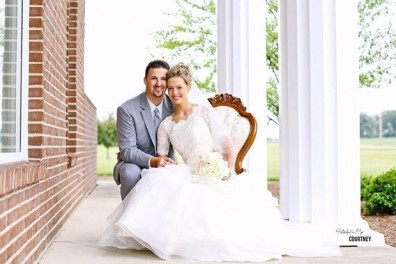 The couple sang a heartfelt rendition of “When God Made You” to each other. Meanwhile, Collingsworth sisters Brooklyn and Courtney also performed during the ceremony along with the Enyart String Ensemble.
Phillip, 20, is a former winner of the Singing News Magazine Young Artist of the Year award and has continued to play a key role in his family’s rise to the top of the Southern Gospel music ranks. He will continue singing lead and tenor vocals for the family group along with his job as Production Manager for P & KC MUSIC LLC.
Sharlenae, who is currently studying to be a Nutritional Technician, plans to travel and sing with The Collingsworth Family as well and perform alongside her husband.
The couple will reside in Amelia, OH.
ABOUT STOWTOWN RECORDS:
Founded in 2011 and expanded in 2014, StowTown Records reflects the musical vision of Ernie Haase and Wayne Haun, in partnership with Landon Beene and Nate Goble. The independent label is the creative home for top artists including Ernie Haase & Signature Sound, The Perrys, The Collingsworth Family, Beyond the Ashes, Doug Anderson, Devin McGlamery, The Taylors, The Browns, and selected classic music from The Cathedrals, their legendary bass singer, George Younce, and The Cathedral Family Reunion. Distributed worldwide through Provident/Sony Distribution, StowTown Records has quickly garnered industry attention with multiple GMA Dove Awards and chart-topping releases from their highly respected artist roster. For more information, visit www.StowTownRecords.com.