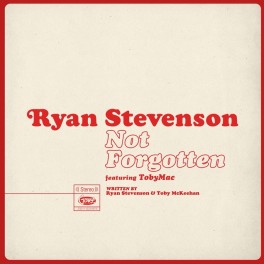 “The heart of ‘Not Forgotten’ is to release a spirit of Hope; proclaiming encouragement over this generation, reminding us that no matter what we are facing, God has not forgotten about us,” Stevenson explains. “In The Message, Isaiah 41:10 says, ‘…”I’ve picked you. I haven’t dropped you.” Don’t panic. I’m with you. There’s no need to fear for I’m your God. I’ll give you strength. I’ll help you. I’ll hold you steady, keep a firm grip on you.’”

Nominated for a 2014 GRAMMY® Award as co-writer of TobyMac’s hit single, “Speak Life,” Stevenson’s own acoustic version of the song is featured on his Gotee debut, Holding Nothing Back EP. The project, which also includes the hit title-cut, released last year.

After capturing TobyMac’s attention, Stevenson—who spent seven years as a paramedic—was signed to an exclusive recording agreement with the iconic artist’s Gotee Records. The Pacific Northwest native is a husband and father of two boys.