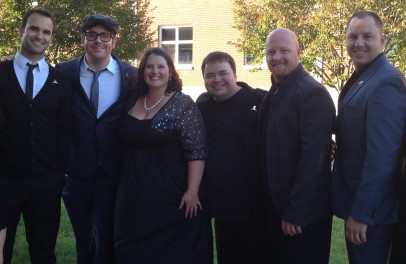 NASHVILLE, Tenn.—Curb recording artist Selah garnered their eighth career GMA Dove Award as the group’s record-breaking hit single, “You Amaze Us,” was named Inspirational Song of the Year during ceremonies held earlier this week at Nashville’s Lipscomb University. Pictured following their win are (l-r): Douglas Fowler and The Afters’ Jordan Mohilowski, co-writers of “You Amaze Us”; Selah’s Amy Perry, Allan Hall and Todd Smith; and Matthew Adcox, co-writer of “You Amaze Us.”

Spending 14 weeks at #1, “You Amaze Us” was the only song to debut in the top position on the Christian Soft AC chart since Billboard began archiving the weekly charts in 2006. The single is also the title-cut from the group’s best-selling ninth studio recording, which released in August.