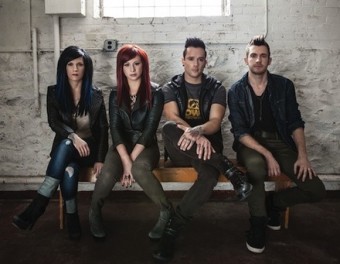 Nashville, Tenn. (July 29, 2014) – Billboard.com said it best when they asked, “Only one question remains: which fan army is the strongest?” as they launched their Fan Army Face-Off, a bracket-style tournament in which various fan armies have squared off to prove that they are unequivocally the loudest voices in the pop sphere. GRAMMY®-nominated and platinum selling rockers Skillet’s fan base, The Panheads, were chosen by Billboard when the music industry’s leading trade outlet rounded up 32 of the most notable fan armies today. Through five rounds, fans themselves have determined which fan armies stride forward or fall by the wayside.

“Now the world finally knows what we in Skillet have known all along,” remarked lead singer John Cooper, “and that is that the Panheads are the best fans in the world! Their commitment to make their mark and win this thing has been relentless. It’s been amazing to watch them rock!”

Skillet has also recently announced their fall European tour, the band’s third visit to Europe in a year. After joining multi-platinum artists Godsmack and Seether along with Buckcherry and Pop Evil for the fifth Rockstar Energy UPROAR Festival in the U.S., Skillet will head to Europe for 20+ tour dates including London, Zurich, Stockholm, Warsaw, as well as multiple dates in Russia, where the band’s popularly is growing exponentially. See full routing information below.
The fall jaunt follows a summer European run, which saw Skillet rocking multiple festivals throughout the continent, performing for thousands of fans. The summer and fall tours have seen the band gain a solid European following, all subsequent to last fall’s tour supporting Nickelback.

About Skillet
Over the course of the past few years, GRAMMY®-nominated and platinum selling rock band Skillet has sold more than two million units in the U.S., racked up more than 160 million YouTube views and amassed a diehard following (dubbed Panheads) whose members number more than five million on Facebook alone. Their 2013 release RISE debuted at No. 4 on the Billboard 200 and No. 1 on the Billboard Rock and Christian charts, which led to No. 1 radio hits for “American Noise,” “Not Gonna Die” and “Sick Of It.” RISE also gave Skillet their late night television debut on Conan. RISE follows the band’s 2009 blockbuster, Awake, which was certified platinum for sales in excess of one million copies in the U.S. and debuted at No. 2 on the Billboard 200. In addition, the record hit No. 1 on the iTunes Top Albums Chart, garnered three Billboard Music Awards and spawned four hit singles including the No. 1 Active Rock smash and gold-certified “Awake & Alive,” the gold-certified “Hero,” “It’s Not Me It’s You” and the platinum-certified “Monster.” “Monster” lived up to its name, selling more than a million copies and hitting Top 5 at Active Rock radio (the first in a string of multiple Top 5 active rock hits,) while its companion video has generated more than 69 million YouTube views. Skillet was the only active rock band to achieve RIAA Platinum Certification in 2012 and was one of only three rock bands (the other two being Mumford & Sons and The Black Keys) to strike platinum in 2012. Skillet is made up of John Cooper, Korey Cooper, Jen Ledger and Seth Morrison.
[Get Connected with Skillet]
Website // http://www.skillet.com
Twitter // http://twitter.com/skilletmusic
Facebook // http://www.facebook.com/skillet
YouTube // http://www.youtube.com/skilletband