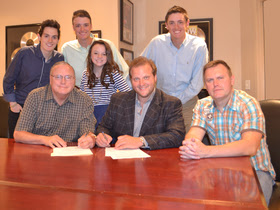 August 12, 2014 (Nashville, TN) StowTown Records is pleased to announce the signing of The Erwins, one of Southern Gospel’s fastest-rising Mixed Groups. The family group includes the distinct standout harmony of four siblings from Edgewood, TX: three brothers, Keith (21), Kody (20) and Kris (18), along with their little sister Katie (13).

“It is common that I hear from the fans about new and upcoming artists, however it is rare that I hear the same name over and over and over,” explained Landon Beene, owner of IMC Management and partner with StowTown Records. “At some point, I had to take notice of this amazingly talented family. It only took a short time to fall in love with them and I am so excited to see what doors open up to their music!”

For the first time ever, The Erwins recorded a live DVD at Fellowship Bible Church April 5 in Dallas, TX.Close To Home, which has just hit the market this week, includes some of their favorite songs from past recordings as well as classic hymns like “What A Lovely Name” and “Mansion Over The Hilltop”.

“We are humbled and honored to be invited to join the StowTown family and to share this label with so many groups that we look up to and admire,” said Tiffany Erwin, mother and secretary for the family ministry. “We are thankful to be working and serving alongside Ernie Haase, Wayne Haun and Landon Beene, and we are excited about the future with this label.”

The Erwins’ hit single “When Justice Called, Mercy Answered”, which is a part of their latest project titled Back To The Basics, is currently surfacing throughout the industry.
“We plan to release our first StowTown recording in February 2015 and can’t wait to share it with all of you!” added Tiffany. “We are also excited to be included on many of the IMC events for 2015 and beyond, and we are looking forward to meeting so many new friends as we are introduced to new places.”

ABOUT STOWTOWN RECORDS:
Founded in 2011 and expanded in 2014, StowTown Records reflects the musical vision of Ernie Haase and Wayne Haun, in partnership with Landon Beene and Nate Goble. The independent label is the creative home for top artists including Ernie Haase & Signature Sound, The Perrys, The Collingsworth Family, Beyond the Ashes, Doug Anderson, Devin McGlamery, Wayne Haun, The Taylors, The Browns, Triumphant, TaRanda Greene, The Erwins and selected classic music from The Cathedrals, their legendary bass singer, George Younce, and The Cathedrals Family Reunion. Distributed worldwide through Provident/Sony Distribution, StowTown Records has quickly garnered industry attention with multiple GMA Dove Awards and chart-topping releases from their highly respected artist roster.