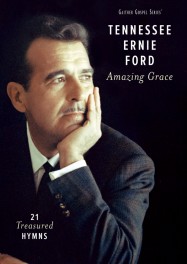 The DVD recording, Amazing Grace, 21 Treasured Hymns, claimed the #1 position again on this week’s Billboard Music Video chart and on the Christian Music Video chart; and the audio recording, Amazing Grace, 14 Treasured Hymns, landed at #24 on the country chart, taking it back into the Country Top 30 for the second time in a matter of weeks. It landed at #19 on the country chart in August, commemorating Ford’s best-ever rank on Top Country Albums.

Amazing Grace, 14 Treasured Hymns hit #1 on the Southern Gospel Albums chart again this past week, reaching the top of the sales chart more than half a century after Ford’s groundbreaking performances and 20 years after the completion of the recording. The audio recording also came in at #14 on the Christian Albums chart.
The audio recording will become available on the Gaither HOMECOMING product display on September 9th, in Cracker Barrel Old Country Store® locations.

Known not only for his voice but for his contagious personality as an artist, radio personality, actor and TV host, the late Country Music Hall of Famer has been a beloved household name since the 1950s. His talent as a singer has garnered sales of over 90 million albums sold worldwide. Gospel music was one of his greatest career passions as seen on his prime-time variety tv program, evidenced by his chart-topping recording successes and captured on this timeless collection.

Amazing Grace is distributed by Capitol Christian Distribution and is available at retail outlets worldwide as well as through Amazon and www.gaither.com. For more information regarding Tennessee Ernie Ford, visit www.ernieford.com.