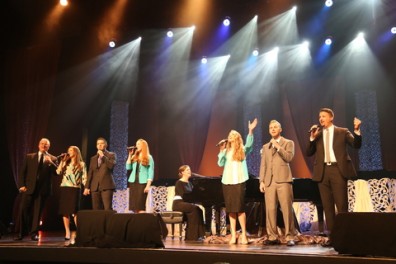 NASHVILLE, TN (June 9, 2014) The buzz continues following The Collingsworth Family’s recent live recording of two projects in Spartanburg, SC. Concert-goers are still talking about the unforgettable, music-packed Saturday evening, and are already looking forward to the upcoming releases through StowTown Records and Provident/Sony Distribution. “Majestic,” a live CD and DVD from piano performer Kim Collingsworth and friends will release on September 23, 2014, and the new “We Will Serve the Lord” DVD from The Collingsworth Family will be available in October, 2014.

The double event clearly energized the crowd; in fact, one audience member would have been glad for the “incredible concert” to have lasted “all night.” That’s high praise, but likely shared by the packed Memorial Auditorium crowd of more than 2,300 attendees who stayed through the entire five-hour marathon. The “Majestic” project was recorded first with three grand pianos, featuring Kim Collingsworth and special guest artists Tim Parton and Stan Whitmire. Two of those pianos were later moved off stage, but only to make room for the live band that joined the filming for “We Will Serve the Lord.”

Phil Collingsworth, Sr. was grateful for the positive outcome of their prayers, planning and preparation. “All the elements of an incredibly successful evening came together seamlessly, and the unmistakable presence of the Almighty was in the room!” He noted that the audience response was especially moving when Kim’s wounded warrior younger brother was honored; Sergeant First Class Brian Keaton has been a patient at Walter Reed for more than two years with a brain injury. More surprises and special guests are in store for those who catch the live “Majestic” CD and DVD, and the live “We Will Serve the Lord” DVD from The Collingsworth Family when the two StowTown projects release later this year.

ABOUT THE COLLINGSWORTH FAMILY:

Since their first engagement together as musicians for a church camp in Petersburg, Michigan in August, 1986 until now, the ministry God has given Phil & Kim has expanded and flourished until it is a full-time livelihood that involves their entire family. Their boundaries of influence have expanded until they have sung and played all over the United States (as well as internationally) into their 27th year of ministry. Their constant, persistent attention to cutting-edge arranging, musical excellence, and a proper balance of spiritual emphasis are the keys to success God has helped them tap.