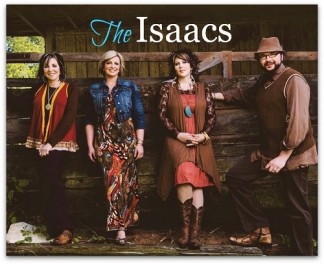 Nashville, TN (August 18, 2014) The Isaacs, collectively and individually received three nominations for the 2014 Dove Awards. Their group nominations are for Bluegrass Song of the Year for ‘Daniel Prayed’ written by G.T. Speer and Bluegrass Album of the Year ‘The Living Years’ produced by Ben Isaacs and Bill Gaither. Ben also produced another album nominated for Country Album of the Year; ‘Here Comes Sunday’ by Wilburn & Wilburn.

“We are so humbled and honored to have received nominations in the GMA Dove Awards again this year. The song Daniel Prayed has been recorded many times in different genres, including bluegrass and southern gospel, and we’ve always wanted to do it our style. ‘The Living Years’ is a fun, and insightful album, featuring harmony and light instrumentation, that contains a lot of songs we have loved down through the years, as well as a few originals. We are always grateful when a work of heart gets noticed by such an elite organization. Thank you Gospel Music Association and fans.” Lily Isaacs stated.

The Isaacs have won over seven Doves in various categories and have had several Grammy nominations in their career.

Ben Isaacs is following up a stellar year in 2013 with awards for his production of projects for groups such as the Gaither Vocal Band and the Oak Ridge Boys with an award already this year for Producer Of The Year at the AGM Awards and now two more nominations for Doves.

Ben commented “I am so blessed to produce the best music in the world for some of the best talent in Gospel Music. To be nominated in this category with so many other talented individuals is truly an honor.”

In other exciting news for The Isaacs, Jimmy and Sonya Yeary along with their son Ayden announced that a new baby is on the way. The addition is expected to join the group on January 31, 2015.
To learn more about the Isaacs got to http://www.theisaacs.com or https://www.facebook.com/TheIsaacs or Twitter at https://twitter.com/IsaacsMusic .
If you are interested in booking the Isaacs go to the Harper Agency at www.harperagency.com or info@harperagency.com .