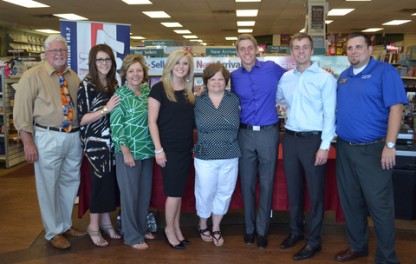 NASHVILLE, TN (June 10, 2014) – The Taylors, the 2013 Favorite New Mixed Group of the Year, celebrated their debut StowTown Records project, “Measure of Grace,” with an early CD release party at Lifeway Christian Store during their Homecoming weekend in Fayetteville, NC.

The highly anticipated festivities began on Friday night with a concert at Fayetteville Community Church featuring Jeff and Sheri Easter, but that was only the beginning of a busy kick-off weekend for The Taylors. The two brothers and two sisters—Jonathan, Christopher, Suzanne, and Leslie—couldn’t wait to share their new project with fans, so the happy crowd in attendance Saturday afternoon at the Fayetteville Lifeway Christian Store was treated to a live preview of the music, a meet and greet, and autograph signing opportunity with The Taylors. The special weekend concluded on Saturday evening, when The Taylors were joined by Gordon Mote in concert.

The Taylors’ new 11-song CD officially releases to Christian retail stores nationwide, as well as digital outlets today, June 10, 2014, through StowTown Records and Provident/Sony Distribution. Their first single from the project, the title song “Measure of Grace,” has recently been released and is expected to continue the momentum the popular group has already enjoyed on radio.

as well as their website (http://thetaylorsmusic.com) for fresh news from the group and updates on their touring schedule.

The Taylors are a brother-sister quartet from the heart of North Carolina. Jonathan, Suzanne, Christopher, and Leslie are dedicated to stirring up the faith of the Christian community, as well as reaching others with the good news of Jesus Christ through Gospel music. The Taylor siblings grew up as members of Fellowship Baptist Church, a small country church, where their father has been a Southern Baptist minister for over 27 years and their mother the minister of music. With their mother’s guidance, it was around the church piano that The Taylors learned their four-part family harmony.