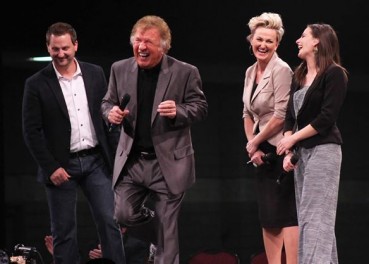 Gaither’s Family Fest held in Gatlinburg, Tennessee on Memorial Day Weekend is a tradition that continues to pack out Gatlinburg’s Convention Center. Family Fest has been going strong over 25 years. Bill Gaither simply knows how to plan and execute a program that honors God and touches people.

For sake of space, every detail can’t be highlighted, however there were several notable moments from Family Fest 2014. The crowd rolled in laughter when Bill Gaither played a tune on his teeth, and when Mark Lowry admitted his toenails resembled corn chips! The audience was captivated with acapella numbers by the Martins, Nelons and Isaacs. The Tennessee crowd went crazy with Jeff Easter leading “Rocky Top” and when the Booth Brothers cut loose on “Still Feelin’ Fine.” The crowd was wow’d by a duet with David Phelps and his 16 year old daughter, Maggie Beth. The Holy Spirit could be felt during the Hopper’s “Jerusalem.” And- our fallen heroes were honored with the Issacs’ rendition of the National Anthem and also with a stunning performance of “Let Freedom Ring,” by the Gaither Vocal Band.

No Gaither event is complete without a full choir sing-a- long. Everyone loved Gaither’s trio and quartet combinations as well as the gospel songs picked. Angela Prim shook the convention center foundation with “Days of Elijah,” and Adam Crabb sang the lights out on “Through the Fire.” Jimmy Yeary stilled the crowd with the Country Song of the Year, “I Drive Your Truck.” Every song was a hit with the audience!

It wasn’t just the singing that was phenomenal, but the music itself was incredible all weekend. How could it not be with Kevin Williams, Ben Isaacs, Buddy Greene and Matthew Holt playing? Sonya Isaacs Yeary and Becky Isaacs Bowman frequented the stage as musicians throughout the weekend too.

There’s no better way to conclude Family Fest than to bring the children of the participating artists to the stage to sing “Because He Lives.” Older children surrounded parents while younger ones climbed in laps. It was sweet, but it seemed the crowd wasn’t ready for Family Fest to be over. In fact, many fans left with tickets in hand to next year’s event- and that says it all. The tradition lives on!