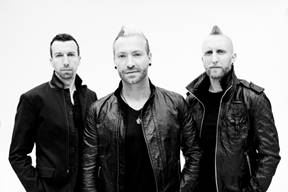 Modern rock favorite THOUSAND FOOT KRUTCH is set to release its first new studio album in over two years, OXYGEN:INHALE, Aug. 26 with marketing, sales and distribution through The Fuel Music into all territories worldwide except Europe, where it releases through Hassle Records. Prior to the release of the highly anticipated recording, the band is offering the lead single and upcoming music video, “Born This Way,” as an Instant Grat Track download beginning today through an exclusive album pre-order campaign at iTunes.

“Born This Way” is a ‘barn burner’ of classic American rock n’ roll by way of TFK’s native Ontario roots. Premiered at Loudwire last week, the single is garnering steam at national outlets like SiriusXM Octane and at stations in at least 35 states on its first day at radio alone (July 22). Already tearing up the charts, “Born This Way” hit the Christian Top 30 at Rock even before the song’s official add date, and moves to No. 18 as the No. 1 most added single on the chart this week.

Thousand Foot Krutch are back, and strike strong with their brand new single,” says Evigshed Magazine. “‘Born This Way’ is a stellar combination bluesy rock groove with a heavy metal flavor…It is a perfect anthem, incredibly inspiring, delivering a strong message for people who are tired of being someone they’re not…These guys know how to rock.”

With upcoming featured performances and headlining positions on the summer festival circuit after performing at Rock on the Range, Rocklahoma and more for the last two consecutive years, TFK will unleash “Born This Way” and other new hits from OXYGEN:INHALE along with fan favorites while on the road. Hitting Creation Northwest, Unity Music Festival, Soulfest and more in the next couple weeks, the band is also engaging the “TFK Army,” fans of the band that they prefer to call their “friends and family,” for a goal-driven PledgeMusic campaign.

TFK PledgeMusic lo-resThe PledgeMusic campaign, which continues through the release of the album, is a place for fans to pre-order the album and receive exclusives from the band that are not available anywhere else, including audio and video downloads, special incentives for all PledgeMusic backers after reaching target levels, and much more. Asking for just one dollar to fully fund the campaign, the band received the first dollar from hardDrive’s Lou Brutus and Roxy Myzal and already has over 3,600 pledges for support at http://www.pledgemusic.com/projects/tfk.

The Ontario, Canada-bred TFK has been a continuously escalating highlight reel since their formation in 1997. Receiving over 2,000, 5-star average customer reviews on iTunes® alone for its 2012 independently released, SiriusXM Satellite Radio Octane-nominated “Epic Album of the Year,” The End Is Where We Begin, the album went on to become the band’s biggest ever selling mainstream album (hitting No. 14 on the Billboard Top 200) and spark five Active Rock radio hits (“Let The Sparks Fly,” “War of Change,” “Light Up The Sky,” “Courtesy Call,” “Fly on the Wall”) and two No. 1’s at Christian radio (“War of Change,” “Light Up The Sky”). Remarkably, in combined streaming of each song from the album, The End Is Where We Begin has been played over 215 million times over all of YouTube and continues receive about 296,000 plays every day.

With additional best-selling albums, Active Rock radio hits “Fire It Up,” “Move” and “Phenomenon,” plus a slew of soundtrack slots, the group has literally infiltrated every facet of pop culture. They continue to receive ongoing ESPN appearances, as well as various NASCAR, MLB, NHL, WWE, NCAA and NFL airings (including the 2010 Super Bowl), along with the “GI Joe” movie trailer, WGN-TV’s “Smallville” and EA Sports’ NHL 2010 and 2013 video games.

All the latest tour dates and additional band information can be found at www.thousandfootkrutch.com, http://twitter.com/officialtfk and www.facebook.com/thousandfootkrutch, where the band has over 1,020,000 likes.

About The Fuel Music
The Fuel Music & Management, LLC, is one of the leading independent distributors of music, CD’s, tapes and vinyl records internationally and enjoys a growing base in artist merchandise sales. Based in Tennessee, the Fuel team brings nearly 50 years of combined music industry experience in record label operations (Furious? Records), record distribution and marketing (EMI Label Group), and artist management for artists ranging from upstart bands to Dove and GRAMMY Award nominated, multi-platinum artists. More information on the company can be found at www.thefuelmusic.com.