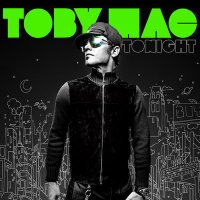 TobyMac’s newest release, Tonight, is posed to be another bestseller for this multi-talented artist. The title track, with a perfect blending of rock, urban, pop, and hip hop influences, is a fail-proof recipe for a hit, and Get Back Up will be the new anthem for anyone’s who’s ever been told they’re hopeless. In Get Back Up Toby’s message is clear: You may be knocked down, but you’re not out forever. You will shine again.

City On Our Knees has already proven itself to be a chart topper as a single by enjoying a #1 reign on the Billboard Top 200 Singles chart. This is a song about people humbling themselves before God and joining their hearts in love, instead of judgment.

Start Somewhere is an especially poignant tune about a broken relationship between two broken people.

If you like music that’ll get you up on your feet, then Showstopper is it. Showstopper was a featured song at the opening game of the 2009 World Series. One listen and it’s easy to see why it was chosen for the ultimate baseball game.

Completing the song list on Tonight is Break Open The Sky, a forward-looking song that reminds us that when life gets us down, we’ve got to keep looking up.

If you’re already a TobyMac fan, your allegiance to his music will be further solidified after one listen to this new album. If you’re new to TobyMac’s music, hang on. You’re in for a real treat.Tonight is going to make your day!