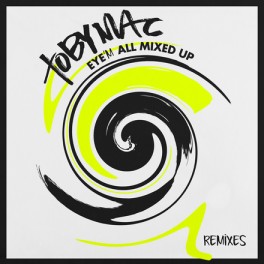 Nashville, Tenn. (September 18, 2014) — Five-time GRAMMY® Award-winner TobyMac’s most recent album EYE ON IT, soared to the top of the charts and earned a GRAMMY® Award, and now those songs are getting revamped on his upcoming remix album, EYE’M ALL MIXED UP, set to release November 4.
EYE ON IT earned a GRAMMY® Award for Best Contemporary Christian Music Album and topped the iTunes Overall and Christian sales charts. It also marked the highest chart debut of his solo career, landing at No. 1 on the Billboard 200, making TobyMac one of only four artists to ever debut atop the Billboard 200 with a Christian music album.
EYE’M ALL MIXED UP features 11 tracks from EYE ON IT, including hits “Me Without You,” “Speak Life” and “Steal My Show” mixed by remixers such as Capital Kings and Soul Glow Activatur of Family Force 5.

Shortly after the album’s debut, TobyMac will head out on the “Worship, Stories & Songs Tour” beginning November 6, featuring Matt Maher and Ryan Stevenson. This 20-city tour will make stops at intimate venues across the country, focusing on the stories behind the songs with stripped down performances.
Additionally, TobyMac received a nomination for Short Form Video of the Year for “Speak Life” for the 45th Annual GMA Dove Awards. The award show will take place at Lipscomb University in Nashville October 7.

About TobyMac:
With more than 11 million units in career sales, TobyMac’s career continues on the fast track. His most recent project, EYE ON IT, garnered him the GRAMMY® Award for Best Contemporary Christian Music Album and the highest chart debut of his solo career landing at No. 1 on the Billboard 200 and topping the iTunes® Overall and Christian sales charts. The project made TobyMac one of only four artists to ever debut atop the Billboard 200 with a Christian music album. His previous four solo projects have received RIAA Gold Certifications and his live DVD, Alive & Transported, is RIAA Certified platinum and received a GRAMMY® award. In less than 15 months between 2012-2013, TobyMac received two GRAMMY® awards, two Billboard Music Awards for Top Christian Artist and Top Christian Album, his first American Music Award for Favorite Artist in the Contemporary/Inspirational category, Dove Awards for “Artist of the Year,” “Pop/Contemporary Album of the Year,” “Recorded Music Packaging of the Year,” “Short Form Video of the Year,” a K-LOVE Music Award for “Artist of the Year” and swept the 2013 Australian Music Award. At the 2014 K-LOVE Fan Awards, he won the award for “Best Live Show.” His album EYE’M ALL MIXED UP is set to release November 4.