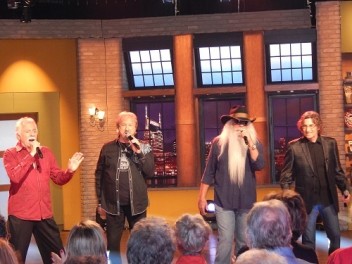 Nashville, TN (August 14, 2014) Tonight is the big night for the winding down of the season series of Nashville’s very popular The Music City Show. Ending this season in a bang, the featured artists are the outstanding Country group, The Oak Ridge Boys.

This dynamic program will be featured on RFDTV tonight, August 14th at 8PM Eastern and 7PM Central times. Growing numbers from Nielsen should tell you that this is one program you will not want to miss. Very few groups have been able to crossover from Gospel to Country and back to Gospel the way the Oak Ridge Boys have and none with the success they have seen.

Program producer and director Scott Godsey commented “We are thankful for the success of the first two seasons. We’ve had some of the best artists in Southern Gospel on The Music City Show so far.

Fans are contacting the program every week and we thank each and every person who supports the show. As long as people want to watch The Music City Show, we will continue producing new episodes.”

This season ending episode will be featuring, of course the mighty Oaks, and in addition the Positive Cowboy himself, Jim Sheldon along with the familiar Blue Jean Band. Host for the evening will be Singer/Comedian Tim Lovelace.

The Music City Show is experiencing phenomenal growth with each new season, so tune in to this program to see why. Remember, it’s TONIGHT.

You can catch a preview of the show at http://youtu.be/EyENO2BKSlQ .

The Music City Show is produced by Godsey and Associates of Nashville, TN and more information about them can be found at http://godseyandassociates.com or http://www.themusiccityshow.com or https://www.facebook.com/themusiccity .

You can learn more about RFDTV at http://www.rfdtv.com or https://www.facebook.com/OfficialRFDTV .