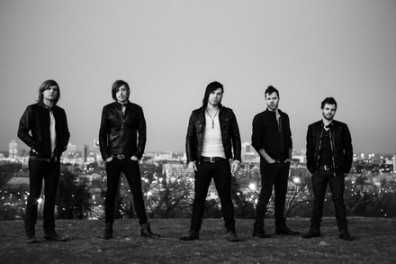 Nashville, Tenn. (August 14, 2014) – Atlantic Records/Hear It Loud/Word Records band WE AS HUMAN continue to establish themselves as one of the dominant new forces in the rock music scene with their dual nominations for the 45th Annual GMA Dove Awards.

The band was nominated alongside label mates Skillet, as well as RED, Scott Stapp and others. The 45th Annual GMA Dove Awards will take place on Tuesday, October 7, 2014 at Allen Arena on the campus of Lipscomb University in Nashville, TN at 6:30pm CT.

“It is incredibly humbling to be nominated alongside some of these other amazing artists,” said lead singer Justin Cordle. “It’s good to know that people still believe in and support rock ‘n’ roll.”

WE AS HUMAN garnered their first major award nomination last year with a nod in the Dove Awards Rock Song of the Year category for “Strike Back.”

Critics and fans alike were blown away by WE AS HUMAN’s explosive entry into rock music last year with the release of their debut, eponymously titled album WE AS HUMAN. Earlier this summer, the band celebrated their first No. 1 single with their hit “Take The Bullets Away (feat. Lacey Sturm)” hitting the top spot at Christian Rock radio. The song is currently racing up the mainstream charts, sitting at No. 11 and about to break the Top 10 on the Mainstream Active Rock Chart.

The band has toured relentlessly since the release of their debut album, hitting the road alongside the likes of Shinedown, Black Stone Cherry, TobyMac, Lecrae, Skillet, Filter, RED and Family Force 5. For more information on upcoming tour plans, visit www.weashuman.com.

About WE AS HUMAN:
WE AS HUMAN signed to Atlantic Records via Hear It Loud, a partnership helmed by John Cooper of Skillet, manager Zach Kelm and attorney Todd Rubenstein, in 2011 after they were discovered by Cooper. Made up of musicians Justin Cordle, Jake Jones, Justin Forshaw, Adam Osborne and Dave Draggoo, the band toured heavily at the start of their major label career, performing before sold-out shows on the “Awake and Alive” Tour with Skillet, Winter Jam 2012, “Release the Panic Tour” with RED and the Carnival of Madness Tour in 2013. Their debut album WE AS HUMAN released in 2013 and was declared the “epitome of what rock music is missing these days.” Their single “Strike Back” was a Top 5 hit on the Rock charts and was nominated for the Best Rock Song of the Year for the GMA Dove Awards 2013. The band is currently nominated for Best Rock Song and Best Rock Album of the Year for the 2014 GMA Dove Awards.