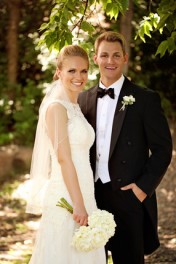 July 10, 2014 (Nashville, TN)… Wedding bells continue to ring in the StowTown Records family during its ongoing celebration this summer. Following the latest announcement of the marriage of Phillip Collingsworth, Jr. of The Collingsworth Family, to his wife Sharlenae, two other StowTown members have recently tied the knot.

Adam Brown, a member of The Browns, married Jennifer Bolkema on June 20 at Shalom Reformed Church in Sioux Falls, SD. The reception followed at the Historic Court House Museum.
The couple later honeymooned in Florida, both on Marco Island and at the Trump Doral Resort in Miami. 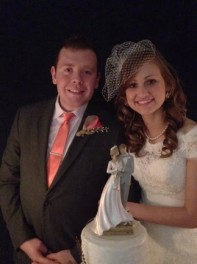 They plan to travel together with the family group. While at home, Jennifer is also a Registered Nurse at LeMars Family Clinic.
The Browns reside in LeMars, IA.

Just a day later, Andrew Goldman, lead singer of The Perrys, exchanged vows with longtime girlfriend Rebecca Helms on June 21 at Main Street Baptist Church in Boonville, IN.
During the vintage wedding ceremony with many friends and family in attendance, the couple performed “The Marriage Prayer” together and Andrew sang a special rendition of “You And I” to Rebecca.

“We met in 2010 at one of my concerts and I’ve been in love with her ever since.” said Goldman. “She’s so supportive in my ministry, and I’m so thankful God has blessed me with such a beautiful and wonderful wife.”
The couple lives in Newburgh, IN.

ABOUT STOWTOWN RECORDS:
Founded in 2011 and expanded in 2014, StowTown Records reflects the musical vision of Ernie Haase and Wayne Haun, in partnership with Landon Beene and Nate Goble. The independent label is the creative home for top artists including Ernie Haase & Signature Sound, The Perrys, The Collingsworth Family, Beyond the Ashes, Doug Anderson, Devin McGlamery, Wayne Haun, The Taylors, The Browns, Triumphant and selected classic music from The Cathedrals, their legendary bass singer, George Younce, and The Cathedrals Family Reunion. Distributed worldwide through Provident/Sony Distribution, StowTown Records has quickly garnered industry attention with multiple GMA Dove Awards and chart-topping releases from their highly respected artist roster.
For more information, visit www.StowTownRecords.com.