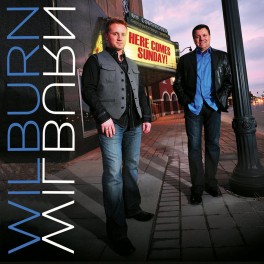 Nashville, TN (August 18, 2014) Award winning Gospel duo Wilburn and Wilburn received two Dove Award nominations at the GMA Press Conference held in Nashville at Lipscomb University on August 13. Nominated in two different categories, Bluegrass Song of the Year and Country Album of the Year, this only adds to their accomplishments including their Dove Nomination for their Album ‘Family Ties’ last year.

In the Bluegrass Song of the Year category “If These Old Walls Could Talk?” which was penned by Dianne Wilkerson and Jerry Salley and has had a lot of radio success. In the Country Album category ‘Here Comes Sunday’ garnered the nomination and was produced by Ben Isaacs.

Jonathan Wilburn stated “We are so honored to be nominated for two Dove Awards. We want to say how thankful we are for the help of those who have believed in us, namely Ed Leonard and Daywind Records, Scott Godsey and Ben Isaacs who brings his creative genius to our recordings. We also want to thank songwriters Jerry Salley and Dianne Wilkerson without whose inspiration for the song we would not have been nominated. Mostly Jordan and I are grateful to God for all the blessings He has continued to put upon us. We plan to just keep putting out good music and hope the fans continue to enjoy it.”

Daywind President Ed Leonard commented “Wilburn and Wilburn getting this type of recognition so early in their career is a testament to their great talent and heartfelt performances.”

You can learn more about Wilburn and Wilburn at http://www.wilburn2.com or https://www.facebook.com/WilburnandWilburn or Twitter at https://twitter.com/wilburn1967 .

If you want to book Wilburn and Wilburn contact the Beckie Simmons Agency at beckie@bsaworld.com or call (615) 595-7500