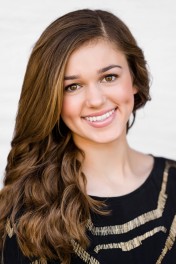 (ATLANTA, GA) January 9, 2015 – Winter Jam 2015 Dome Spectacular added Duck Dynasty star and Dancing with the Stars contestant Sadie Robertson to the lineup for Atlanta on February 7. Winter Jam is a 47-city, three month tour that offers an incredible evening of concerts by 10 top artists* in Christian music, plus worship and ministry.

Sadie Robertson
Sadie is no stranger to the spotlight. She was cast into the limelight by her famous Monroe, LA family who own Duck Commander duck-call company and star on A&E’s reality show, Duck Dynasty. Known for her dimples and engaging smile, this 17-year-old high-schooler is more than a pretty face. A popular motivational speaker, Sadie spends her summers on mission trips and speaks at Christian youth camps sharing her message “to live original” as a Christian young person today. She recently competed on ABC’s Dancing with the Stars, collaborated on a formal dress line in time for spring prom, and has written a book called “Live Original: How the Duck Commander Teen Keeps It Real and Stays True to Her Values.”

“Our very first Dome Spectacular in Atlanta last year was such a phenomenal success with nearly 30,0000 fans and the addition of quality guest artists and celebrities, that it created a daunting task for us to try to top,” said Troy VanLiere, tour producer. “But with the announcement of Sadie Robertson being added to our already stellar line-up, we are well on our way! Her character, integrity and the way she lives out her faith for the entire world to see on both Duck Dynasty and Dancing with the Stars is a perfect “heart-match” for Winter Jam. She’ll be a big hit on the Winter Jam stage and something people won’t want to miss. Plus there is more to come…”

Winter Jam Tour Spectacular is a $10 at the door concert and no tickets are required. The Winter Jam event in Atlanta – hosted at the Georgia Dome for the first time in 2014 – has been aptly dubbed Winter Jam Dome Spectacular for the day. In 2014, the Atlanta event set a Winter Jam attendance record by attracting nearly 30,000 people.

For the second consecutive year, Atlanta is hosting Jam Zone, a pre-Winter Jam celebration at the World Congress Center, adjacent to the Georgia Dome. Presented by KIA, the Jam Zone is a special free admission event before Winter Jam from 10:00 a.m. – 3:00 p.m. with live local music, games, food, and much more.

People who purchase a Jam Nation membership in advance are allowed early entry to the venue at 3:30 p.m., along with other benefits. For more details about Jam Nation, go to www.jamtour.com/jam-nation.

For more information on the Winter Jam Dome Spectacular in Atlanta, visit http://2015.jamtour.com/shows/atlanta-ga.

*for King & Country will not be appearing on these four dates – Ft. Wayne, Indianapolis, Birmingham & Memphis.

About Winter Jam: Since its formation by NewSong in 1995, The Winter Jam Tour Spectacular has featured many of the top names in Christian music, including TobyMac, Third Day, Newsboys, Steven Curtis Chapman, Lecrae, Skillet, and more! Winter Jam, the world’s #1 first quarter tour for four consecutive years, hosted more than 550,000 people last year (according to Pollstar, 1st Qtr.) From a single concert in Greenville to one of music’s biggest annual tours, God has continued to bless Winter Jam. For more information on Winter Jam, visit www.jamtour.com.