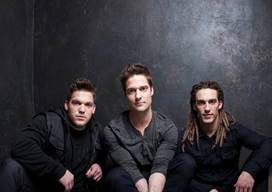 Adam, Luke and Levi Klutinoty, three brothers hailing from the working class town of Butler, PA and collectively known as About A Mile, released their anticipated, self-titled debut last week from Word Entertainment. This week, About A Mile, whose name originates from the belief that Jesus carried his cross “about a mile,” has the bestselling album debut in their genre for a new artist this year, and hit No. 4 on iTunes’ Christian/Gospel album chart. With a chemistry and accomplished artistry that is garnering wide critical acclaim, About A Mile’s music and lyrics speak to members of all faiths about the suffering then triumph of a crucified and risen Christ.

Produced by GRAMMY®-nominated and Dove Award-winning producers Ian Eskelin (Francesca Battistelli, Sidewalk Prophets, All Star United) and Howard Benson (Hoobastank, Daughtry, Third Day), mixed by Neal Avron (Weezer, Linkin Park, Switchfoot) with additional mixing credits from Chris Lord-Alge (Muse, Creed, Daughtry), About A Mile continues to gather acclaim. With significant features and reviews in NewReleaseTuesday.com, CCM Magazine, CBA Retailers+Resources, HearItFirst and many more, the band was also featured in Rhapsody’s New Release section, as JesusFreakHideout.com suggests giving “these three young men from Pennsylvania a chance on your car radio as you drive to the beach this summer. Your speakers and your hearts
will thank you.”

Taking the new music on the road, About A Mile wrapped up a tour with Sidewalk Prophets this past spring, has toured with DecembeRadio and are currently scheduled to play at venues in 9 states before the end of September. See all the latest tour dates, as well as a story-behind-the-band video and more, on the newly re-launched website, www.aboutamile.com.