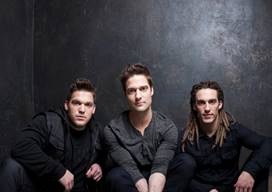 Three brothers hailing from the working class town of Butler, PA, collectively About A Mile, make their anticipated, self-titled debut today from Word Entertainment. About A Mile, whose name originates from the belief that Jesus carried his cross “about a mile,” may be new on the charts, but brothers Adam, Luke and Levi Klutinoty, have a chemistry and accomplished artistry that is garnering wide critical acclaim as the trio’s music and lyrics speak to members of all faiths about the suffering then triumph of a crucified and risen Christ. See a compelling story of the band on video at http://smarturl.it/aboutamileepk.

“About a Mile is one of the most talented bands I have worked with recently,” says Benson. “I jumped at the chance to work with them. I had the same feeling as when I produced P.O.D., Third Day, Flyleaf and Skillet. They are going to be huge!”

For About A Mile’s lead guitarist and vocalist Adam Klutinoty, who was a “Guitar Center King of the Blues” runner-up winner in New York City (Adam’s “spoon guitar solo” audition can be seen at this link), tangible success has never been the group’s goal, but rather, to impact listeners and simply find contentment in their faith. That goal is aptly summarized in the band’s lead single and video “Satisfied,” which Adam wrote after nearly dying during a sickness where food reacted like poison in his system.

“It actually came after I hadn’t eaten in seven days,” Adam explains of the song that is currently a Billboard Top 25 Christian AC/CHR hit and climbing. “I was fasting from food and just drinking water during my illness, slowly realizing that as long as we have Jesus, we will always be satisfied.”

Following the debut of the “Satisfied” music video and “Who You Say You Are” acoustic video last month by NewReleaseTuesday.com, CCM Magazine’s feature story hit yesterday and an upcoming Dove Awards Presents HearItFirst Sessions features About A Mile acoustically performing both “Oxygen” and “Who You Say You Are” from their debut album. As numerous other media outlets cover the band, here is what the critics are already saying:

“There are no filler tracks and this is the most solid debut I’ve heard since Over and Underneath by Tenth Avenue North. If you want to experience an uplifting, soul-stirring and worshipful album, look no further than About A Mile…If you like the rock bands The Fray, Lifehouse, Rhett Walker Band and Tenth Avenue North, you need to check out About A Mile.” – NewReleaseTuesday.com

“About A Mile might be a band making their full-length debut, but their self-titled LP sounds as seasoned as any veteran release this year.” – CCM

“It takes a unique style of musicianship and a rare attitude of worship to pull listeners in long enough to stay for 12 tracks. This self-titled debut from Adam, Levi, and Luke Klutinoty makes their case with a set that twinges nostalgic for the Goo-Goo Dolls, grunge and dc Talk’s Jesus Freak.” – CBA Retailers+Resources

“The band is ‘musical chemistry perfected’…Front man Adam Klutinoty is not only an exceptional vocalist, but he’s also the most talented guitarist to hit the Christian music scene since Lincoln Brewster — but Adam takes it to a whole new level. His style is the perfect blend of new and old. A Christian band of this caliber is long overdue.” – RockingGodsHouse.com

“The vocals sound strong and the melodies are very catchy…the music sounds top notch with brilliant musicianship throughout the album.” – Louder Than The Music

“The subject of the album is clear: it’s Jesus, pure and simple. The tracks both proclaim who Jesus is and worship and praise Him for what He has done in the brothers’ lives, without restraint or reservation. With skilled instrumentals and strong, smooth vocals, they play and sing their awe of and love for God.” – Leading Hearts Magazine

“…once in a while, a band comes out of nowhere to deliver a great debut project, which is exactly what About a Mile’s debut project is…Never have I been more excited for a debut project from a band since for KING & COUNTRY…it is almost a sure thing that their album will be well received…” – 365 Days of Inspiring Media

“About A Mile’s debut… consistently portrays attitudes and messages that stem from a deep faith if it is not addressed directly, with a balance of quiet thankfulness and desperate need, earnest prayer and firm resolve.” – Christian Music Review

Taking the new music on the road, About A Mile wrapped up a tour with Sidewalk Prophets this past spring, has toured with DecembeRadio and are currently scheduled to play at venues in 10 states before the end of September. See all the latest tour dates, as well as a story-behind-the-band video and more on the newly re-launched website, www.aboutamile.com.